As soon as Lenny Kravitz wished Jason Momoa a happy birthday on Instagram, fans quickly came together to agree on one thing — and it really wasn’t about either man.

At the same time, it was entirely about both men. But mostly it was about Lisa Bonet having chosen and landed the two hunks at differing points in her life.

There must have been something about that black-and-white image of Kravitz and Momoa standing together, the latter smiling into the camera with a twinkle in his eyes while the former was bohemian chic with untied bowtie and killer shades trying and failing to hide both how cool he is and just how damned sexy.

Waiting for your permission to load the Instagram Media.

Momoa and Bonet married in 2017, after a twelve-year relationship. They share two children, a daughter born in 2007 and a son born a year later.

Bonet is also the mother of Zoe Kravitz, with Lenny Kravitz, who was a teenager when Momoa and Bonet first came together, creating the blended “one family” her father is talking about.

A stunningly beautiful blended family, at that. 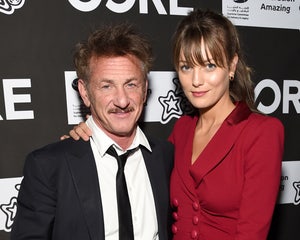 Hilariously, neither Momoa nor Kravitz trended after the sweet birthday message. Instead, it was Lisa Bonet who began to rise up the trending topics list on Twitter. She scored praise from fans for their beautiful and harmonious blended family, and for the beautiful men who make it up.

“Community” star Yvette Nicole Brown was extremely blatant about singling out Bonet for praise, even though it was her husband’s 41st birthday. “Good evening to #LisaBonet and only Lisa Bonet,” she hilariously captioned her response to Kravitz’ image.

It was actually a beautiful tribute to Bonet inspired by Kravitz’ post. Many were quick to point out that it was she who attracted them, and not just because of her external beauty.

Everyone think Lisa Bonet is lucky and she is but she’s obviously special and Jason and Lenny are the lucky ones 😍 pic.twitter.com/fFPnV5tI6G

Sometimes I wonder what Lisa Bonet did in a past life to be able to land both of these incredibly sexy men in her life. She must have very good karma. pic.twitter.com/9mXY6h9pFi

If life is a game Lisa Bonet has already won https://t.co/SUlZ7u6eKB

Lisa Bonet needs to give us her prayer transcripts right along with Ciara. A Ted Talk would be nice too https://t.co/ndikRpEanN

Let’s not get it twisted, Jason Momoa & Lenny Kravitz are the lucky ones. It’s Lisa Bonet 😍 pic.twitter.com/m4mJu0Zcom

How Lisa Bonet flexin on us and she not even in the damn pic 😂 pic.twitter.com/XWnETWTHwS

My type is basically men Lisa Bonet would date. https://t.co/5cRSiJVUbr

Lisa Bonet needs to write a book on A-game. She got it. pic.twitter.com/qBEPORlD94

Got a story or tip for us? Email TooFab editors at tips@toofab.com.